MSFragger can be downloaded here

FragPipe (a graphical interface and pipeline for MSFragger on Windows) can be downloaded here.

Before you get started, make sure your LC-MS file format is compatible with the workflows you want to perform (for Thermo data, we recommend converting .raw files to mzML).
See the MSFragger wiki for full details of system requirements.

The types of searches that can be performed for glycoproteomics data are detailed below, along with several key parameters and recommended settings. Details on all parameters can be found in the MSFragger documentation here. The key parameters listed here are the differences required to perform a glyco-search; all other parameters can generally be used as in a normal MSFragger search (i.e. left as default or set to appropriate values for your instrument/analysis). Default parameter files for several types of glyco-searches can be found here, or by loading a glyco workflow in FragPipe.

This is the primary search method recommended for glycoproteomics searches with MSFragger. It uses involves setting glycan masses of interest as mass offsets (similar to an open search, but only considering a narrow window around each mass offset). This allows MSFragger to simultaneously search for peptides that have lost none, part, or all of their original glycan, making it ideal for searching collisional, hybrid, and photo-activation datasets.
Key Parameters:

Open searches can be performed on glycoproteomics data, for example to determine what glycans are present in the data. Open searches function similarly to the mass offset search in that delta masses (mass offsets) between precursor and sequence masses are used to define glycans and other modifications, but with a few key differences. Because any mass shift (within the provided tolerance) is allowed, not all mass shifts correspond to glycans. For this reason, oxonium filtering is currently disabled for open searches. However, glycopeptide-specific fragments ions (Y, b~, y~) can still be generated for peptides containing the sequon/residue(s) of interest to effectively search for glycopeptides. If glycans of interest are known, a mass offset search will likely be more sensitive.
Key Parameters:

Recommended only for ETD/ECD data. Enter glycans of interest as variable modifications (see the MSFragger wiki for formatting details) on specified residue(s). It is not recommended to search more than a dozen or so modifications at once.
Key Parameters:

FragPipe can be downloaded here. Follow the instructions on that same Releases page to launch the program.

Please use the main FragPipe tutorial to learn the basics of FragPipe. This tutorial will cover only the differences needed for glycoproteomics searches from the basic workflow outlined there

FragPipe includes a number of pre-packaged workflows, including several for glycoproteomics searches. We recommend using one of these workflows as a starting point, but parameters can be entered manually as well.

To load a workflow: 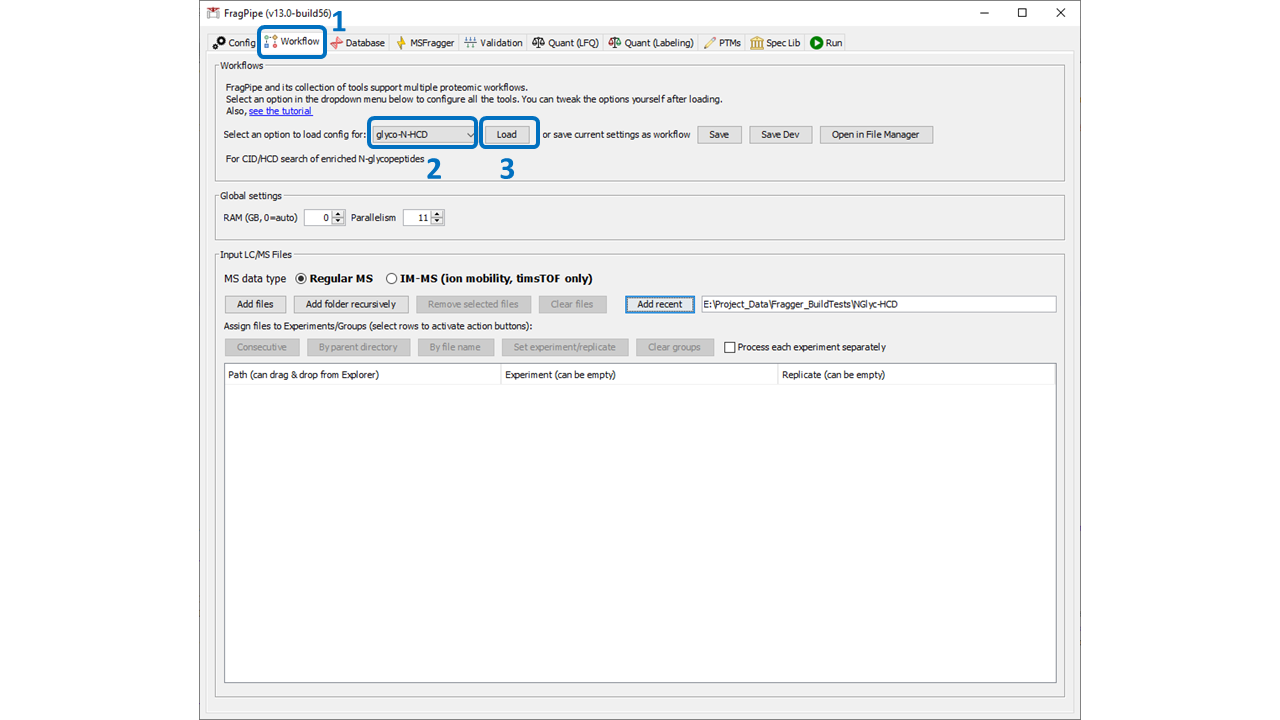 Navigate to the workflow tab, select a glycoproteomics workflow from the dropdown menu, and press the “Load” button. All default glycoproteomics workflows begin with “glyco-“, followed by the type of glycan (N-linked or O-linked), and activation type (HCD or Hybrid). “HCD” is optimized for beam-type CID fragmentation but can be used as a starting point for any vibrational activation (trap CID, IRMPD, etc). “Hybrid” refers to combined electronic (e.g. ETD) and vibrational activation, for example, EThcD or ETciD.

The workflow will initialize default parameters on several of the subsequent tabs.

See the FragPipe tutorial for information on how to load a database file. No differences are present for glycoproteomics searches.

The vast majority of differences between regular and glycoproteomics searches can be found on MSFragger tab. The key areas are highlighted here. Standard parameters are modified as in a typical search - see the main FragPipe tutorial for details about the parameters on this page. Open searches are performed by changing the precursor mass range and units here. 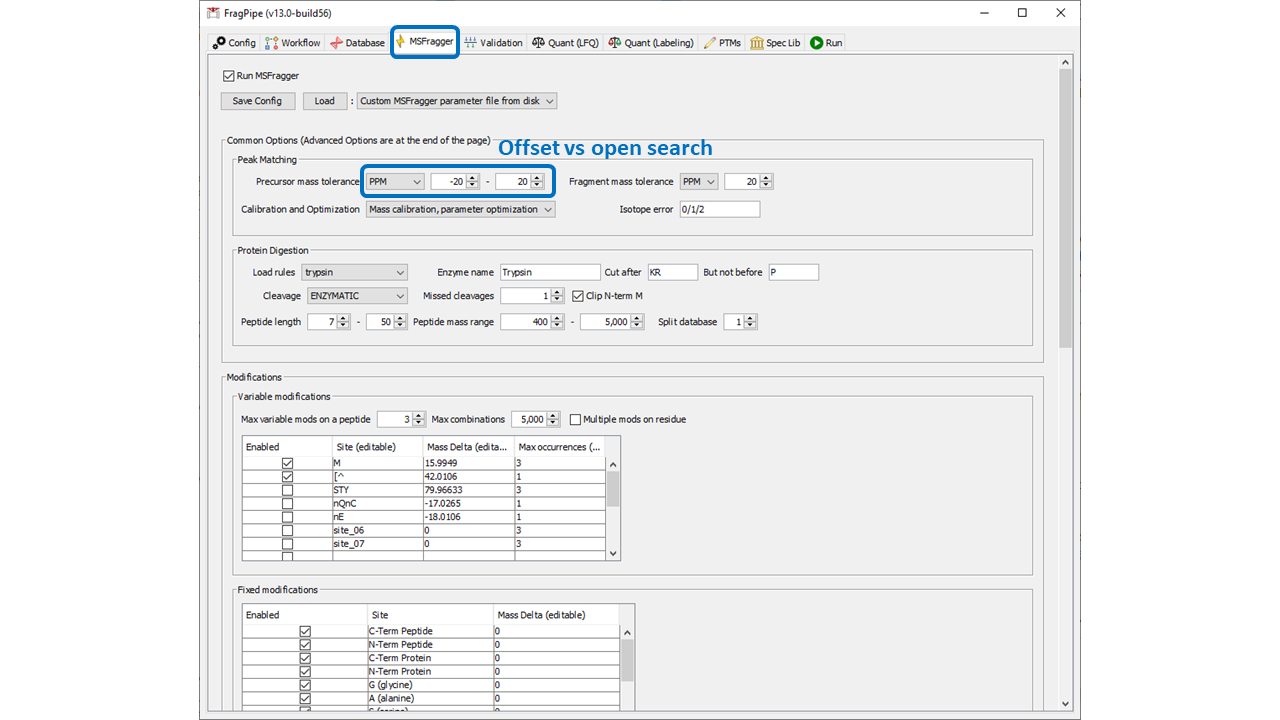 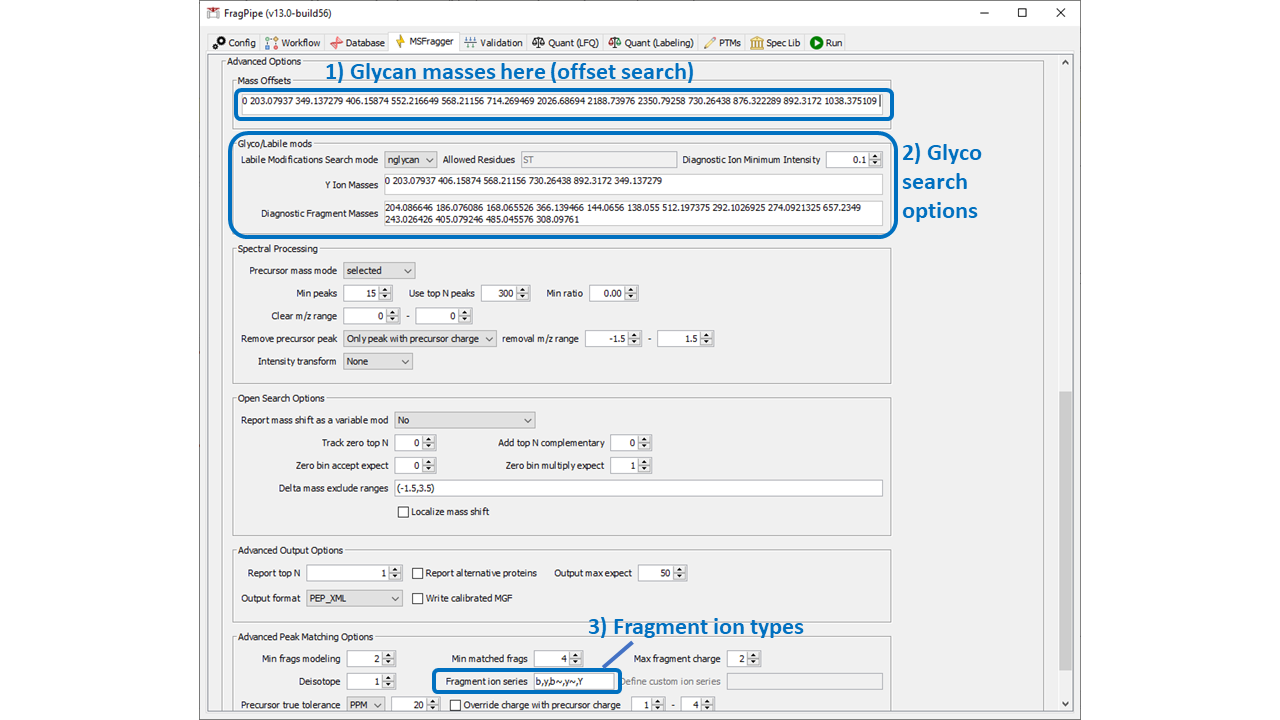 Most of the glyco-search options can be found in the advanced section.

(1) For mass offset glyco searches, input all glycan masses of interest in the mass offset box. Open searches leave this box empty.
(2) Adjust the options in the Glyco/Labile mods box.

(3) Enter the fragment ion types appropriate to your analysis in the “Fragment ion series” box. Recommendations are as follows, but should be adjusted based the types of glycans being studied and/or acquisition parameters:
N-glycan CID/HCD: b,y,b~,y~,Y
N-glycan hybrid (EThcD, etc): b,y,c,z,Y
O-glycan CID/HCD: b,y
O-glycan hybrid (EThcD, etc): b,y,c,z
N- or O-glycan ETD/ECD: c,z (NOTE: this search should be done with glycans as variable modifications, NOT mass offsets, as glycans are not expected to dissociate in this mode.)

For highly enriched N-glycopeptides (at least 10-20% of all spectra are of glycopeptides), setting the “–glyc” tag in the PeptideProphet options can help by modeling peptides with the consensus sequon (N-X-S/T) separately from peptides without. Otherwise, there are no differences on this page between a glyco-search and a standard mass offset or open search.

No difference between a regular MSFragger search and a glyco search. See the main FragPipe tutorial linked at the beginning of this document for details and instructions.

On Windows, we strongly recommend using FragPipe (above) to run MSFragger, but the linux commands below can be adapted to run via command line if desired.

On Linux, the following shell script includes commands to run MSFragger and downstream processing with Philosopher for glyco-searches. These commands are identical to standard MSFragger operation, the only difference for a glyco-search is in the MSFragger parameters file.

Mass offset and open searches will generate PSMs with delta mass values corresponding to glycan masses. These delta mass values do not contain localization information in the output PSM table (by default) and so will not be rolled up to the peptide and protein.tsv output tables. This can be changed with the mass_diff_to_variable_mod parameter (see above), which can be used to make the output compatible with quantification tools. Note, however, that this prevents re-localization with PTM-Shepherd, which should be disabled when using.